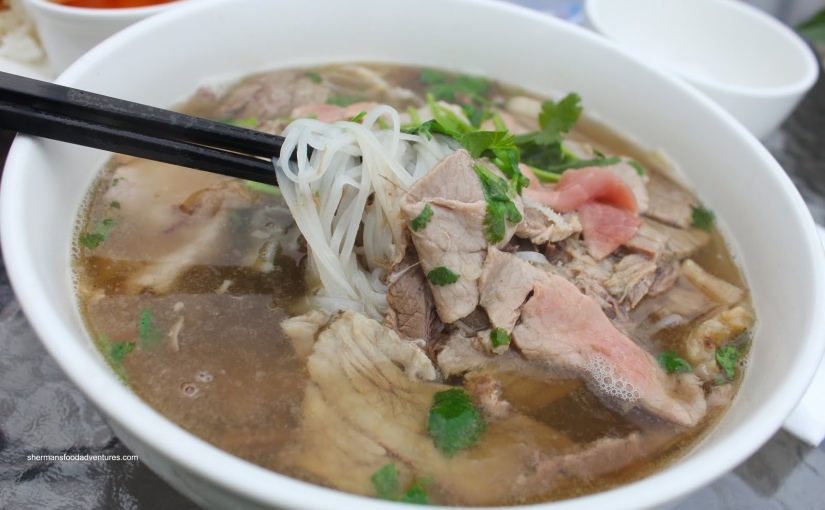 It was The Leading Man’s birthday last week, and it was one of those occasions for which the phrase “the best laid plans” could have been written.

I won’t go into the full story; we’d be here for a while, and to be frank there are some stories that don’t need to be shared with the Readership at large. But there’s a detail apposite to the subject at hand that I should mention.

We were in a pan-Asian place whose USP is the ordering system. Touch pads and projections on the table turn ordering into a kind of clunky, retro-futurist game. This would be great if the food lived up to the playfulness of the general concept but, like a lot of West End eateries, the general experience was over-priced and underwhelming. Take my seafood noodle broth.

I couldn’t take umbrage with the description—it was indeed, a broth with seafood and noodles in it. It was full of fresh greenery and veg, the prawns and wontons were fine if severely rationed (two of each), but the whole thing just didn’t live up to expectations. I wanted something lively, zingy, bursting to life in my mouth. What I got was dull, insipid stuff. I left hungry and unsatisfied.

“By the gods”, I thought on the train home. The belligerance that comes from three pints of beer and a growly tummy settled on me like a cloak. “I could do better myself.”

Readership, that’s exactly what I did.

The star, the soul, the point to any soup or broth is the stock upon which it’s based. If that’s NFG, then so is the dish as a whole. For once, as I considered the options for the evening’s repast, I realised that I was already starting at a disadvantage—no decent stock in the house, godammit. However, there’s always Plan B, and one that’s appropriate to the mission. Miso.

As an emergency meal for those times when you can barely pull up the energy to boil a kettle, a sashet of miso paste is a genuine lifesaver. Pop in a mug, hot water over the top, and you have soup in the time it takes to make a coffee. Here, again, it would prove to save the day.

Two sachets of miso paste, then, dissolved into about 600ml of water to create a stock that has a pleasing thrum of umami without too much salt. Good start. Now for some veg. I unsheathed my cleaver and got choppin’.

Garlic, a couple of cloves. Ginger, a thumb. Chilis, two bird’s eye. Three decent spring onions (the red ones in the shops now are sweet, mild and delicious) half a red pepper and a couple of sticks of celery. The first three, fine dice. The last three, fine slice. The lot went into a hot stock pot, which had a little oil in the bottom. I let it all sizzle for a coupe of minutes, then hoiked the veg out, and added a sliced jumbo chicken thigh.

Yes, chicken. The point where this stopped being a seafood noodle broth was the point that I realised I didn’t have that much seafood in the house. Some raw prawns and er that’s it. “Divergence”, thought I. “You cook for no-one’s pleasure but thine own. Go with the chicken.”

Sod it, I went with the chicken. Five minutes each side, enough to get the chicken browned and a little extra fat (because as we all know, fat means flavour, thank you Hairy Bikers) in the pan. Good smells wafted up and I began to think that I’d got this right.

I threw the veg back into the pan for a few moments, letting everything sizzle and pop. Then the stock on top, in a swoosh of amber. I turned the heat down, clapped on a lid, and poured myself a glass of the Wine Of Victory (Rioja, in case you’re wondering). Bubble, simmer. Amazing smells. 15 minutes to chow time.

With 5 minutes to curtain up, I finished the broth. In went the prawns, which I’d marinaded in lime juice and salt and were therefore almost cooked already, the noodles (yes, ok, they were stirfry egg noodles, but they were what I had) and the juice of a lime. Oh, and, in a moment of inspiration, some samphire that had been guilt-tripping me from the depths of the fridge ever since I’d bought it. To the broth with you, weird seaweedy stuff.

Once the prawns had firmed and the noodles were soft, we were good to go. Into deep soup bowls with a handful of coriander on top, and to the table with me.

Oh my gods it was good. Pungent, deeply flavoured, full of interesting bits and bobs. I’d worried about the samphire tipping the salt balance the wrong way, but my fears were groundless. If anything, it gave the broth the final seasoning hit it needed. TLC and I both scoffed a bowlful in happy silence.

Better yet, there was enough to eat for dinner the following day. The stock had intensified, the chili hit becoming more noticable. I goosed things up with some pancetta, fried off in a hot pan before I poured in the leftovers, and more coriander, this time added as part of the cooking process rather than a garnish. Served with some toasted sourdough on the side, the broth was as far from authentic as it gets. But boy, was it ever good eating.

I’m always looking for inspiration as a cook, whether it be from recipes I stumble over on the internet or in cookery books, or meals I’ve eaten, or just that desperate point where I’m staring at a half-open fridge and the unexpected confluence of two ingredients strikes a spark which leads to dinner. But the notion of being inspired by a disappointing meal is something new, and one that bodes well for the future. Here’s a challenge for you. Next time you’re served a meal in a restaurant that isn’t that great, see if you can do any better. You might just surprise yourself.

One thought on “I Can Do Better, or The Tao Of Broth”