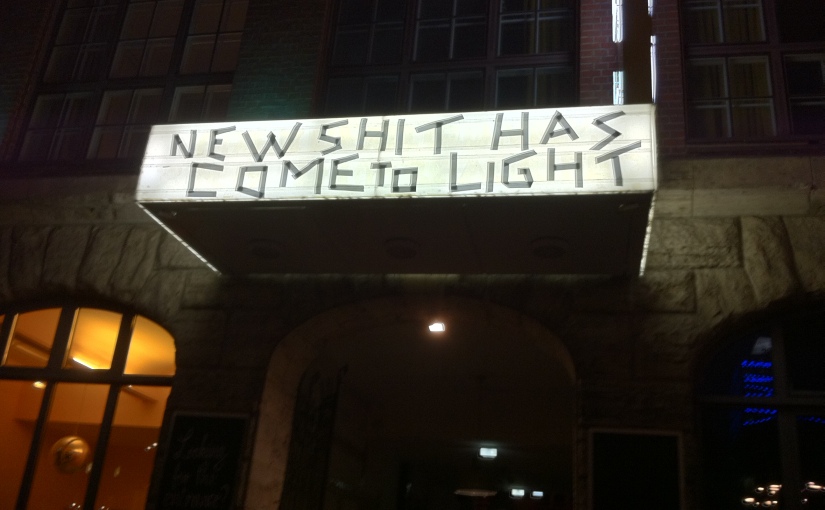 Holy macaroni, it’s July! As our strangest year ever continues to take us on a voyage into uncharted territories, allow us to help you navigate your way to safe harbours, sheltering from the storms. Now is the time. Here is the place. This is The Cut.

There’s an old saw in SF circles which states “there’s nothing so dated as yesterday’s future.” It remains a constant fascination to us how so-called ‘prophetic’ works of speculative fiction got some things right and other bits not so much—call it the ‘where’s me jetpack’ conundrum. When it comes to the internet, most writers were caught off guard. John Brunner’s ‘The Shockwave Rider’ is a notable exception. Then William Gibson came along. As previously stated in The Cut, Gibson’s work is almost un-nervingly on the money, to the point where some people argue we are living through his slow apocalypse, The Jackpot.

Easy as it would be to bang on about Bill’s futurological nous, we’re here to talk about yesterday’s future—specifically the movie version of his short story Johnny Mnemonic. As a snapshot of how Hollywood began to portray cyberpunk, this CNET piece is right on the money.

A sidebar from the man himself…

We love Anne Billson, film writer, author and cool cat lady. If you’re a film fan, horror buff or simply enjoy some great photos of Belgian bars and beer, she’s very much worth a follow on the socials. We approve strongly of her recent Guardian piece on movie hospitals, which moves swiftly from the proto-Carry On of the Doctor In The House flicks to Lindsey Anderson’s extraordinary state-of-the-nation work, Britannia Hospital. Ignored or vilified on its release, it’s a worryingly contemporary satire on the National Health in every sense of the word.

Blimey heck, Scott Pilgrim Vs. The World is ten! It’s one of those movies custom-engineered to become a cult favourite. Director Edgar Wright’s insistence on close fidelity to Bryan Lee O’Malley’s comics made it look and feel unlike any other film released at the time. In fact, to our mind, there’s still little to touch it in terms of sheer bonkers commitment to the cause. Entertainment Weekly has a highly entertaining oral history on the making of the film. Mind-boggling to see that cast list now. Scott Pilgrim was a massive rocket-boost to the careers of many of our best-loved names.

Finally in the film section, we were deeply saddened to hear the news this week of Carl Reiner’s passing. One of the great talents of post-war American comedy, he’s been behind so many classic hilarious moments. From The 2000 Year Old Man to The Man With Two Brains, the world is a funnier place because of him. This touching piece on Reiner and his partner in crime Mel Brooks and their daily dinner date from The Guardian is a sweet reminder of the mind and heart of a comedy genius. So long, Carl.

I make no apology for the aggressive nerdery of this bit. The late 80s was a boom time for all sorts of experimentation in the English-language comics form. Watchmen, The Dark Knight Returns, even the scrappy indie scene that brought us Teenage Mutant Ninja Turtles and Elfquest—to my mind, as a reader growing up with his nose in the racks of Forbidden Planet in Denmark Street (yes, I’m that old) this was a golden age.

One title people seem to have forgotten, or choose to, is Dave Sim’s Cerebus. Starting as a funny-animal satire on creaky old fantasy tropes (Cerebus was an aardvark who dressed like Barry Windsor-Smith’s version of Conan the Barbarian), the book quickly evolved into a free-wheeling treatise on anything Sim had on his mind. His take on gender politics in particular was mature and inclusive.

Until it suddenly wasn’t. In a series of text pieces scattered through later books that devolved into bizarre rants, he flipped the discourse into a foul torrent of bug-eyed misogyny. In the course of a few issues, he lost both respect and audience. But Sim doubled down, and the book became ever more furious at what Sim saw as anti-male bias. Cerebus quietly ended in 2004, and Sim has published little since.

John Roberson’s article on Medium digs hard into the change in Sim’s narrative, taking as background Sim’s most effective story arc—Jaka’s Story. It’s a long read, but seriously worth it if you’re as much of a comics nut as me.

Welcome to the ‘not sure where this fits so we’ll put it here’ section of The Cut. We really enjoyed this long read from Unherd on sex imbalance, the growth of so-called ‘incels’ and how this sort of thing has been going on for a lot longer than we might have thought. To be brutally honest, though, we’re largely including it because of the (era-appropriate?) mis-spelling of the word ‘Viking’. Our Rob is getting ideas now. For gods’ sake, someone hide that horned helmet.

Some really interesting discussion is going on in the food writing world right now, following the implosion of Bon Appetit over issues of race and misappropriation of recipes. In short, it comes down to a simple question—why are the people best positioned to talk about and showcase a particular country or region’s cuisine not given the chance to do so? BA’s Research Director Joey Hernandez posted on how the beleaguered site hopes to do better and lose the white-bread versions of food heritage here.

In the same vein, the increasingly essential Vittles newsletter takes on the challenge and runs with it. Lara Lee’s passionate and evocative piece on the varied flavours of Indonesian sambal puts you very much in the company of an expert. She stirs in her personal history with the condiment, adds a dash of geopolitics and finishes with a triumphant swirl of a recipe for tomato sambal. We felt both hungry and ready to cook at the end of it—surely a mark of really good food writing.

We try to big up our friends in their new ventures when we can, so it’s a pleasure to bring the new venture by old friend of the site Keith Eyes to your attention. Home Media Minefield looks at the different versions of a film that are available to bring to light the hidden extras and extra-value items you might not have realised were part of the package! Keith is a charming and knowledgeable host, and we again felt like we were in good hands. He’s four eps in, and skewing towards Star Trek movies in the current run. Trust us when we say he really does know what he’s talking about.

We were drawn to this video essay on modern ska—or rather the practice whereby some punk bands are adding a jaunty brass section to their lineup and calling themselves ska. Inevitably the situation is a lot more complex. And yes, we’re still talking about cultural misappropriation, which is always going to be a part of the conversation when we consider that rock and roll, jazz and the blues all came out of the Black experience. Obvious, really, innit? Anyway this is solid, thoughtful music criticism. Worth seeking out the Ska Britannia doco that gets heavily quoted in the piece as well.

I’m spoiling you with this week’s End Music, by sharing two clips. Firstly a blast of Aussie punk from The Saints. These guys were real trailblazers, issuing the punk clarion call early enough to spook Malcolm McLaren. He rushed the Sex Pistols into the nearest studio upon hearing ‘I’m Stranded’, fearing he was about to be beaten to the punch. In fact, the track was released several weeks previously, but The Saints didn’t have the image or the clothing to ping the radar of an outrage-ready press in the way the Pistols did. ‘Stranded’ feels like the missing link between Iggy, The New York Dolls and the sneer of Rotten and co—lyrically bleak, musically both blunt and sharp. Who’s up for a pogo?

And finally. Michael Stipe has been quietly releasing new music for a couple of months. This collaboration with Big Red Machine’s Anton Dessner feels very much of it’s time. Sad, yearning yet hopeful, it has the legs to become a theme for the year. Great to have you back, Stipey. Readership, please to enjoy ‘No Time For Love Like Now.’

Time to end transmission. Expect a truncated edition of The Cut next week as we celebrate the gradual reopening of the country with a staff retreat somewhere in a field in Hampshire, awlright. There will be yoga, yurts and yoghurt. We’ll be like different people at the end of it.