Join me, whydoncha, as I explore the unexplored hinterland of my DVD collection.

We all have them. Those DVDs that were gifts, or part of a 3-for-£20 deal. You get them home, put them on the shelf and then, well, kind of forget about them. There they sit, still in their clingfilm, never quite enticing enough to pick up, unwrap, and pop in the player.

Readership, I have decided to give those neglected discs a chance. I want to review my collection and possibly clear out a few items that I know I’ll never watch again. But every film deserves a shot, right? So, every movie I own that is still in its cellophane wrapping is going to be dug out and watched.

Now, I knew that I had a bit of a problem in terms of buying films and not watching them. I hadn’t quite realised just how bad the situation had got. Readership, behold the enormity of the task ahead of me.

Impressive, huh? That’s probably a year of movie-watching if we’re going to do this once a week, and that doesn’t include the box-sets where one out the five films has been watched. I’ve also found a stack of discs from the era when newspapers were giving away free cover-mounted films. Those, too, go into the to-be-watched pile. That’s a ton of cinematic goodness. Relatively speaking.

So, where to start? Well, one disc jumped out at me. A gift from the ever-sophisticated Simon Aitken last Christmas, this one promises to be a gem of the highest ordure. So, let’s settle down with a cup o’ tea and a biccie, and enjoy together… 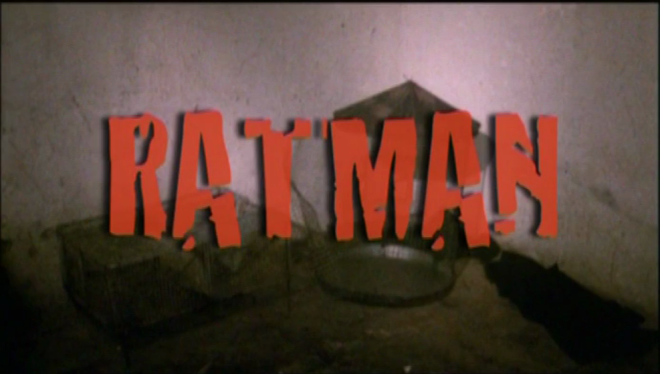 I don’t think we need to assume that this is going to be high art, or indeed high anything. When the back cover promises “a guilty horror pleasure of gory delights” and “a glorious exploitation fest of bad taste, worse acting, needless nudity and tense, wince-inducing slaughter”, you know that Ratman was not high on any awards list in 1988.

The creature of the title is the result of twenty years of experimentation by the mad Dr. Olman, living in isolation on a remote Caribbean island. By “placing the sperm of a rat into the ovum of a monkey” he has created a creature with “the adaptability of a rodent and the intelligence of a primate.” In other words, a nasty little bugger that’s good at hiding and jumping out at you when you least expect it.

Rather than pricey puppetry or stop-motion, director Carnimeo hit on a killer wheeze. He cast the at-the-time world’s smallest man, Nelson De La Rosa, as the Ratman. Fitted out with a set of pointy rodent teeth and teeny tiny claws, De La Rosa is strangely disturbing, like Mini-Me gone feral. Ratman, of course, escapes from the birdcage in which Dr.  Olman keeps him, and goes on the rampage, sinking his teeth into locals and one of a pair of visiting models, who is found wearing her colleague’s dress. This case of mistaken identity brings the other girl’s sister running. Along with a smarmy journalist, played by a series of terrible Hawaiian shirts filled by ‘actor’ David Warbeck, she sets out to find her sibling and solve the murders.

Ratman is no lost classic, let’s be clear. It’s as cheap and cheesy as a roadside caff’s toastie, and a murky, soft transfer means it’s frequently tough to see what’s going on, especially during the murders–which, let’s face it, are the main reason we’re here in the first place. To be fair, Shameless, the distributor, make it clear from the start that they were after the most complete version of the film, which meant using less than optimal elements. The end product, which looks like it was put together from projection print and analog video masters, has a gritty, exploitationy feel that suits the material well.

Scream queen Grimaldi elevates proceedings as model/Final Girl Eva, chewing the scenery with brio in every scene. Whether in the obligatory shower scene, to running around a darkened house in short shorts, she’s the girl you can’t take your eyes off. The rest of the cast are, as the cover copy makes plain, terrible. But that’s to be expected.

It’s not the paciest of movies, and the sequences with Eva’s sis and walking plank-in-shirt Warbeck drag painfully. But the last half-hour, as Ratty stalks Eva through the mad doctor’s dilapidated compound, are nervy fun, full of misdirections. There’s even a proper jump scare.

Guiliano Carnimeo directed a number of giallo, including the respected The Case Of The Bloody Iris. He hasn’t directed since Ratman, which seems a shame. The movie has a certain verve and gusto, even if the gore and effects are more jammy than gruesome.

So, the big question, and the one I’ll ask at the end of every edition of this strand:

was Ratman worth unwrapping?

I’d have to say yes. It’s not brilliant, but the movie is a solid chunk of mozzerella that, at 78 minutes, doesn’t outstay its welcome. It’s worth sticking around for the final twist, as well. If you want to watch it, it’s available at Lovefilm.

Or you can win my copy! Just answer this simple question:

Nelson De La Rosa was the mascot for which American baseball team?

Answers in the comments, first correct one gets the disc. Good luck!