In the act of Unwrapping this movie, I am breaking one of my cardinal movie rules. I can’t remember exactly when I decided that I wasn’t going to watch any more remakes, or which film sparked off that promise. I have a recollection of storming out of the cinema, shaking clenched fists at the sky and screaming “As the gods are my witness, never again.” Or maybe I’m exaggerating.

The thing is, I’ve managed to avoid an awful lot of lousy “reimaginings” of some of my more beloved movies. Listeners to the Speakeasy will no doubt recall Clive, Simon and I going on about this at some length late last year. Our conclusion then was that, with the occasional exception, remakes simply aren’t worth the time, effort or money involved in watching them. 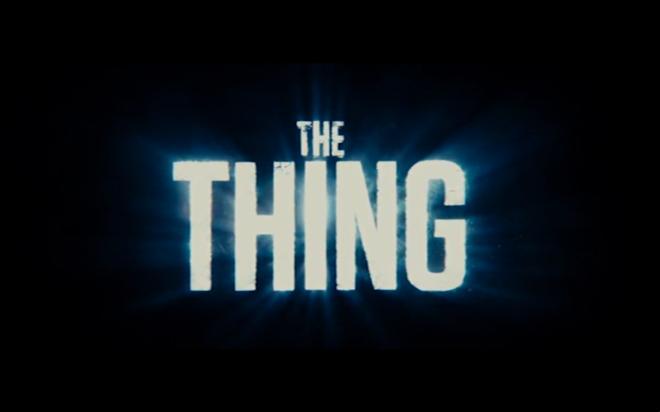 That question being “what the hell was I thinking?” If there’s one director whose name springs to mind when you’re looking for work that’s been regularly stripmined for remakes, it’s John Carpenter. I’m a huge fan. Up until Vampire$, I’d say that he could do no wrong. I would even argue that Ghosts Of Mars has some merit. Why, then, do I own a copy of one of the lesser regarded remakes of a stone cold classic of his, albeit one that up to now has languished in its wrapping with a SALE – £3 sticker on it?

Readership, I wish I had an answer for you. I think simple curiosity was to blame, and a slightly misjudged notion of watching both films back to back. That double bill has never happened. On the basis of what I’ve seen today, it never will.

To business, then. The 2011 version of The Thing is a prequel, telling the story of what happened at Thule Station before the guys in the helicopter chased the dog into Outpost #31. A group led by scientist Sander Halvorson discovers something in the ice. Something alien. A craft, and a survivor. With the help of an American contingent including biologist Kate Lloyd (played with admirable toughness by Mary Elizabeth Winstead), they bring the creature they find into the station, only to have it wake up and do what it does best: murder, impersonate and infiltrate.

If you’re expecting any surprises or radical changes in the existing mythos from van Heijningen or Heisserer, then you’ll be left waiting. What we have here is a textbook example of everything wrong with the culture of remakes in contemporary cinema. We are presented with a cynical attempt to make money from our fond memories of a favourite movie, with little attempt made to do anything interesting with the material. That’s not to say its a carcrash. Far from it. The 2011 version of The Thing is competently told and directed, and convincingly acted by a cast that treat the material with respect. The effects are fine, if heavy on the CGI. They crib Rob Bottin’s mind-bending originals while offering little with the same sense of deranged surrealism.

And therein lies the problem. This film is the unwanted first chapter of a story, the bit that any writer worth his salt would lose in the first draft. There’s no reason for this film to exist. It tells us nothing we want to know, shows us nothing that we want to see. It’s so slavishly beholden to the original that it even recycles shots from John Carpenter’s opening chase sequence in order to tie the two together. The face of the final creature is a slavish recreation of Bottin’s two-face-melt image – a fleeting glimpse of something horrible that gets plastered all over a CG end-boss. Even the credit font is the same, Carpenter’s favourite, good old Albertus. The best bits of The Thing (2011) have been around since 1981.

I’m genuinely befuddled by this film. I can’t see why anyone thought it was a good idea. The production values are fine. There’s nothing inherently wrong with it. But it has none of the febrile tension of the original, and the paranoia and un-nerving atmosphere of Carpenter’s film have been binned in favour of more monster stuff and the inevitable raft of attempted jump scares.

Well, no. But then again, yes. See, the problem is that I’m irrevocably tied to the original. It’s always in my top ten. Any remake is going to suffer when placed against a film I regard as one of the finest examples of horror cinema out there. Would I feel the same way if I hadn’t seen the 1981 film?

I don’t know, is the simple answer. It’s impossible for me to forget about Carpenter’s movie when I watch van Heijnigen’s because they share so much of the same DNA. I can’t be a fair judge. I’m glad I saw it, because it reinforced my belief that all remakes are lousy, unfair as that may be. In this case, history has had the last word: there was no audience for the film. It tanked at the box office, and van Heijnigen hasn’t worked in the big leagues since. I needed to see it to be sure, and in doing so I can retreat back under my turtle-shell, content and bulletproof in my beliefs.

If you’d like to judge for yourself, my copy of The Thing (2011) is up for grabs. Just answer this simple question:

Which other beloved 80s horror remake has an Eric Heisserer script?

As ever, answers in the comments.

6 thoughts on “Movies Unwrapped: The Thing”