I have a good example of a film-maker who has, without question, destroyed every scrap of credibility he once had. The writer and director of some of the greatest horror films ever made, his output in the last 20 years has lurched from barely competant to outright laughable.

END_OF_DOCUMENT_TOKEN_TO_BE_REPLACED

And we're back. After a long hot summer, in which the last thing on my mind is sitting in X&HTower's screening theatre (plush and opulent though it may be), the weather has turned appropriately autumnal. Time to close the blinds, fire up the projector and dig into the teetering pile that is the Unwrapped archive.

Today's choice was informed by the fact that Peter Strickland's The Duke Of Burgundy has lit up the Toronto Film Festival. Time to look at the movie that brought his name to the public eye: Berberian Sound Studio.

Plot dump approaching, topped with the red flag that is the Spoiler Alert.

Gilderoy (played with twitchy reserve by Toby Jones) is a renowned dubbing mixer, who is hired by an Italian sound studio to help rescue an Argento-like horror film that has run into problems. He quickly finds that the environment, people and material are hugely different to the world of pastoral documentaries and children's programmes that he knows, and quietly begins to lose his mind…

Shot on a tiny budget on location at Three Mills Studio in East London, Berberian Sound Studio is a prime example of a film-maker getting the most out of his environment. There's no questioning the authenticity of the production design, and the attention to period detail is astonishing. If you're a fan of old film gear, be prepared to fangasm now. I was especially pleased to recognise an Albrecht sound follower: a piece of kit that I still use on a near-daily basis.

The action is kept completely indoors. There isn't an exterior shot in the film, adding immeasurably to the airless, claustrophobic atmosphere. It's all artificial light, pools of darkness, empty corridors.

The word that kept springing to mind while watching the film was Kafkaesque. Gilderoy is an outsider, floundering in an environment in which he doesn't understand the rules, where he keeps making the wrong impressions. His efforts to reclaim expenses are thwarted as the accounts department claim there's no record of him flying to Italy in the first place. As his work in sound-designing the film starts to become an ordeal, the walls and dark rooms of the Berberian Sound Studio start to look ever more like those of a prison—or an asylum.

Let's make one thing clear, directly from the lips of Santini, the maestro behind The Equestrian Vortex, the movie on which Gilderoy labours. This is not a horror film. Sure it takes plenty of cues from the mise en scêne of giallo. Just look at the black gloves of the never-seen projectionist, the pumping, Goblin-like soundtrack from Broadcast. The film is full of attractive Italian voiceover girls, of just the kind that would find a horrible end in yer typical Eurohorror. But if you're looking for gore, best keep looking. The only things to see the edge of a blade in this movie are the fruit and veg that Gilderoy attacks to provide the sound effects for Santini. We don't even see a single frame of the film itself that the diminutive sound engineer reacts so strongly against. That being said, the sight of a witch being vaginally violated with a red-hot poker, the scene that causes Gilderoy the most problems, is one that I could do without.

Strickland's refusal to bow to expectations as to what Berberian Sound Studio is or how events in the film pan out have led many to view the film as a frustrating experience. I understand that. The film is deliberately slippery, dodging away from genre tropes and formula story beats. Santini isn't an anagram for Satan, however hard you try to make it so.

The trouble with slippery things is, of course, that they're hard to grab hold of, and Berberian Sound Studio remains opaque, asks far more questions than it answers. How much of it is real? Are we, as is suggested at the end, simply watching a film within a film? There's no definitive answer, and loose ends aplenty. It famously divided opinion right down the middle when it was screened at Frightfest in 2011. Even now, synopses of the film differ wildly and are mostly inaccurate, pitching the movie as proto-giallo when it's nothing of the sort.

Which brings us to the 64,000 lire question—was Berberian Sound Studios worth Unwrapping?

Yes, it was. Difficult but tought-provoking, it's at once a treatise on the craft and sheer hard work involved in getting a film made, and a warning of the cost that the process can exact on you. The people that Gilderoy encounters are, for the most part, monstrous. One of the ADR actors even goes by the nickname 'The Goblin'. Gilderoy, the very image of the innocent abroad, has no chance amongst these creatures.

As a stylistic exercise Berberian Sound Studio is a storming triumph, and there's enough going on to keep you watching, and guessing, until the end. And indeed after. Enter without expectations, and you just might find yourself ensnared. 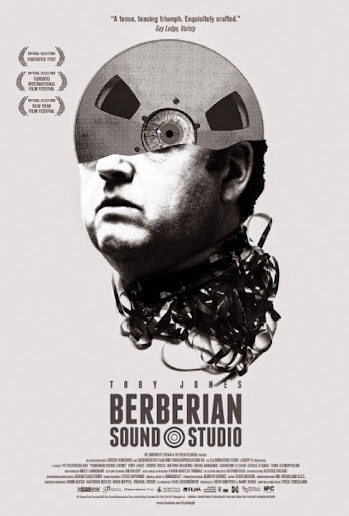 Aah, a night at home alone. The perfect excuse for a curry and a horror movie. To me, my Unwrap stack!

END_OF_DOCUMENT_TOKEN_TO_BE_REPLACED

In the act of Unwrapping this movie, I am breaking one of my cardinal movie rules.  END_OF_DOCUMENT_TOKEN_TO_BE_REPLACED

This week, I thought I’d give the Leading Man a chance to redeem himself.  END_OF_DOCUMENT_TOKEN_TO_BE_REPLACED

In this edition of Movies Unwrapped, we’re going back to the sixties, for a far-out slice of wiggy soft-core sci-fi from the home of cheapo English exploitation. END_OF_DOCUMENT_TOKEN_TO_BE_REPLACED

Here we go again, as I dig into the teetering pile of shrink-wrapped films over in the dustiest annex of my DVD library. END_OF_DOCUMENT_TOKEN_TO_BE_REPLACED