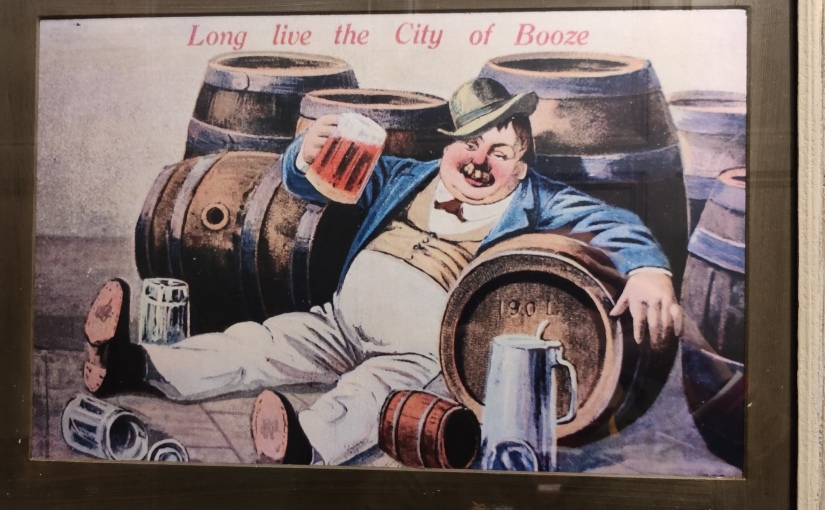 Brrr. There was nothing else for it this week. After five months of inactivity, we got out the spanners and wrenches and gently persuaded the crotchety old boiler* running the even older heating system back to life. Even in austerical times there comes a point where you can only have so many layers on. And typing in gloves is hard. The office smells of burning dust and hot metal, but at least we’re warm enough to put this issue to bed.

Before we all decide to give up completely and hibernate under a duvet, check out a guide to autumnal films, a couple of new ventures worth your attention and an invitation to get the Camparty started.

Image taken at the hilariously-named Temperance Arms in Ambleside, Cumbria.

We may whinge and moan about the drop in temperature, but after reading this piece on the challenges facing foodies in Alaska, we clearly have no idea. A freezer full of elk and reindeer sounds like fun. The struggle to get hold of fresh produce? Less so.

Comics legend Frank Miller may be considered a bit of a spent force nowadays—his glory days overshadowed by far-right lunacy triggered in the aftermath of 9-11. His work thereafter became ugly and cartoonishly lurid. It was a wild whiplash turn from his earlier, more liberal viewpoint. There are fadingly few of us who remember his absolute high point, a collaboration with fellow funny-book legend Dave Gibbons which brought into being one of the great female comics characters of all time. With thanks to Ganzeer for the reminder, allow us to introduce you to Martha Washington…

Everything Is Amazing keeps coming up with the goods, and this is a particularly cool article. Consider, if you will, the heights of human ambition, hubris and the ceaseless quest for more, higher, bigger. Look on our works ye mighty, and despair…

How To Build A Rainstorm

Chloe Maveal is back! Well, actually she never went away, as denizens of Comics Twitter will happily note. We mourned the closure of her brilliant nexus of graphical nerdery, The Neo-Text review. Now Chloe has pointed her many talents at a new project—The Gutter Review. The aim? To celebrate comics culture, especially the forgotten or ignored aspects (like Give Me Liberty in the link above). In short, Chloe and her merry band offer fresh perspectives on the wild world of funny books. You know we’re on board.

Once, there was a podcast called Tea And Jeopardy, hosted by the silken-voiced Emma Newman. She talked to a huge roll-call of SF authors, using humour and charm to tease out their innermost secrets before cruelly despatching them. Fictionally speaking. Emma’s back after a bumpy few years with a new show, Tea And Sanctuary, which aims to be nothing less than a balm to your weary soul. Trust us, this is going to be a very safe space.

As the leaves begin to fall, carpeting the ground in shades of flame and gold (what, we have to sweep up again?) the time has come to close the curtains and watch a few movies. This listicle from the BFI has some fine films on offer, all of which promise to evoke the season of the witch/mellow fruitfulness (delete as applicable).

Films For The Season

Joel Morris takes his comedy very seriously. Some would say a little too seriously. Case for the prosecution—this breakdown of the opening two minutes of an episode of The Simpsons. The show may be long past it’s golden age, but as an object lesson of how to get your audience up in the saddle, there’s a lot to take from Joel’s hard work. Work, we should stress, which didn’t even make it into his upcoming book on the subject…

Two minutes and many jokes.

There is a particular kind of science-fictional aesthetic to which the old duffers of The Film Desk are strongly drawn. Not for us the hovering animated displays and glassy touchscreens of most modern cinema. No way, hose. We like our surfaces to be spackled with big chunky buttons and clattery analog readouts and glitching CRT monitors. The Star Wars televised universe is, happily, on board with the look, but we’d like to see more of the Used Future…

Speaking of the future, what’s the best way to predict it? Let’s put it another way—how can you best sound like you have a hotline to the times beyond? Nostradamus is still quoted as the great prophet but other seers and visionaries are available. The key, apparently, is to be as vague and coded in your predictions as possible…

How Not To Predict The Future

And finally. It’s the weekend. Booze is on the agenda. As fans of both beer and our bitter buddy Campari, we are excited to dive headfirst into the world of beer spritzes. Best not to experiment with stouts, though. Could get messy in every sense of the word.

Let’s Get This Camparty Started

Know what? You folks have been very accommodating towards all of our foolishness this week. You deserve a little treat through the medium of Exit Music.

You deserve… Something Good.

See you next Saturday, party people.