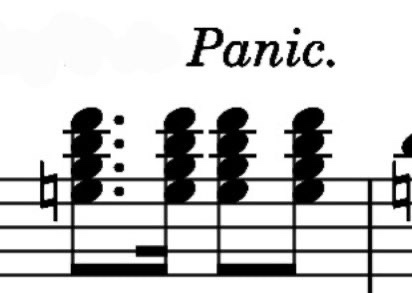 At this point, we’d almost welcome a new variant of Covid, just to quiet things down a bit.

This week, we go all out to lose ourselves some readers.

We had an inkling there was a community into ambient music. We were not aware that their views on gentle synthesised burbling or softly-blown pan pipes could be anything other than mild and slightly fuzzy round the edges. We were wrong. Take this detailed and frankly rather distressed review of—well, let’s just say you’ll never view low tide on the beach at Bournemouth in the same way again.

Can’t Get Enough Of That Wonderful Duff

We are big, big fans of comics editor Claire Napier. Her mordant views on the state of The Ninth Art keep us cheerfully grounded, and her insights are never less than educational. Here, she writes with her usual sharp focus and bone-dry wit about what it takes to be a comics fan in a country which views the form as little more than kids stuff.

It all starts with Frankenstein. Mary Shelley’s fever-dream tale is arguably the core text in both modern science fiction and horror. But it’s also a work of deep philosophical exploration. While we’re at it, Frankenstein could be an element of the spark which led to an explosion in modern science and medicine.

The Border And How It May Be Breached

After Yang, an upcoming SF movie starring Colin Farrell, sounds like one of those thoughtful and arty films which resonate long after their sadly limited theatrical engagements. If you’re fans of movies like Ex Machina and HER, this could be right up your information super-highway. Here’s an interview with Colin and film-maker Kogonada about the film. See you in the cheap seats.

Adventure cartoon Jonny Quest was not really a thing for British kids in its 1960s heyday, but it certainly was for a generation of American sprouts. Some of whom went on to major careers in the police and military. Which is a worry as Jonny Quest was without argument one of the most violent shows on the box…

We may lose followers by posting this long, thoughtful piece on how we got ourselves into such a state over gender. Big deal. We think Nancy Powaga is right on the money here, and happily endorse her message and her writing.

Time for refreshments. Lots and lots of refreshments. If you plan on eating your way through The Lord Of The Rings trilogy, better start off with an empty stomach. Although that adds to the risk of wooziness with all the booze on the schedule. It’s a finely-tuned balancing act. Nate Crowley takes the road less travelled…

There And Back Again In Time For Dinner

Film is a collaborative process. Getting a movie in front of a paying audience involves the hard work of hundreds of dedicated and skilled professionals. The auteur theory is plain wrong. Don’t ever believe a credit which say ‘a film by…’ unless it’s followed by the entire cast and crew list. But somehow, the myth that film music is the work of one composer is still out there and widely believed. Nope. Sorry. And now some of the people working for the big names in soundtracks want to be heard for themselves…

The Folks Who Write The Music For The Movies

And finally. The perfect piece for this here newsletter—nerdy, wide-ranging and gleefully uninterested in your level of patience. It also talks about comics at some point. We might just set up a stall there. Presenting the themes and magical thinking behind the lyrics of one of the great English mystics and poets, Mark E. Smith.

(As a sidebar to all the above, and only if you can stand any more, we offer The Mark E. Smith Guide To Writing). It’s not as long, promise. And it’ll get you into the pub.

Right, we need a blast of cleansing punk after that lot. Let’s crank up The Dead Boys, Live at CBGBs in 1977 with a furious noise-wall of a set. This is rock ‘n’ roll, Readership. This is the good stuff, fresh from the vein. Gulp it down. REFRESHING.

See you next Saturday, deadlings.