Yesterday saw Oxford light up, as their annual Night Light festival ushered in the Christmas season. The town was heaving as the colleges and museums opened their doors to the curious, and markets filled the labyrinthine corridors around Oxford Castle and filled St Giles’ wide boulevard.

It was great fun to wander about and catch unexpected moments and photo opportunities. Mummers wandered through the throng. A drum troupe set up on the Monument and shook the air. Belly dancers gyrated in the halls of the Ashmolean, the sinuous music a fitting soundtrack to the new Egyptian galleries. TLC and I sat in the great hall at the Bodleian Library, and felt 2 IQ points smarter just by osmosis from all the learning that had soaked into the narrow benches we sat upon.

I had been there earlier in the day, looking at an exhibition of some of the Library’s greatest treasures. I stood wonderingly in front of an original page of Mary Shelley’s manuscript for Frankenstein, complete with corrections and additions from Percy Bysshe. An edition of the Koran from the 15th century glowed in gold-leafed perfection, and I could see where Craig Thompson’s obsession with Arabic calligraphy came from. An illuminated Gutenberg Bible, one of less than 20 left in the world, came close to giving me the chills. The fact that these documents still exist is amazing enough. That they are such beautiful artifacts in their own right is nothing short of a miracle.

At its best, Oxford is a magical place, filled with history and wonder, with new delights down every narrow alleyway. Yesterday it shone, lit up like a beacon of civilisation and knowledge in the darkness.

I’m still trying to get my head around the geography and zoning of Oxford’s fair city. I prefer it to London if I have a spare day off and nothing better to do. But, as someone with heavy links to the Smoke, I can’t help but find parallels between different areas. For example, I think of Jericho as the Islington of Oxford. It’s full of chichi bars and restaurants, a nice little art-house cinema and a general relaxed upscale vibe.

The Cowley Road, on the other hand, is closer to Camden–lively, multicultural, funky and fun. Here’s where you’ll find all the cheap, good-value curry houses, the O2 Academy, and most importantly for greedy old me, the two Atomic restaurants.

Atomic Burger has been a source of simple pleasure for a while. The pop-culture theming is so deliciously over the top that it moves from tack to an art statement. The signature burgers are named after icons from Elvis to Chuck Norris, and they’re remarkably good, generous and flavoursome.

Now a partner restaurant, Atomic Pizza, has opened a ten minute hike down the way (like Camden High St, you forget just how long the Cowley Road can get, especially when you’re weak with hunger) and it’s a blast. Bigger and brighter than the burger shack on the way back to St. Clement’s, the pizzas are again themed, although you can also build your own. I’m especially intrigued by the burger pizza that they offer. The food is as bold and brash as the setting–eating next to Han Solo in his ROTJ block of carbonite was an experience, I can tell you.

The excuse for the visit (apart from a raging need for a 15″ pizza, the Gambit in case you’re wondering, chicken, bacon and cajun BBQ sauce) was a meet-up with some Twitter pals, @LizUK and @Gergaroth, with Liz’s mate @jowyton along for the ride as well. It’s always a thrill to finally have a face-to-face with people you only know from their online presence, but I’ve always found it works nicely. Gets the tedious small talk out of the way quickly so you can concentrate on the good stuff. Deciding on appropriate T-shirt film quotes for the staff, for example. The boss was up for the game as well. Mind you, he was the one wearing the Inigo Montoya t-shirt that started it off in the first place.

The setting helped the whole session to be silly, uproarious fun, and we’re definitely doing it again after Christmas. Although I shan’t be risking the legendary Godzilla Challenge – a full-size pizza with a triple order of fries, chili, cheese and their weapon-grade Godzilla sauce on top. You get a T-shirt if you finish. Or if you don’t. And hopefully a lift to the hospital afterwards.

You can find both restaurants up and down the Cowley Road. They’re not easy to miss. Links to the menus and videos of a Godzilla Challenge winner below. I don’t think you can go wrong for a fun night out in Oxford.

We spent a highly agreeable day in Oxford yesterday, and took full advantage of TLC’s ability to get us into the colleges for free. I can recommend a wander through the grounds of Magdalen or Balliol. You get a feel for why the city is called The Dreaming Spires.

The pic below is of the window at the chapel of Balliol College. It had me quite mesmerised.

Up until the point where I was lured away with the promise of a pint, anyway.

Seems to me sometimes that the more you travel, the less there is to see…

As seen over cloister number 5 at Magdalen College, Oxford. 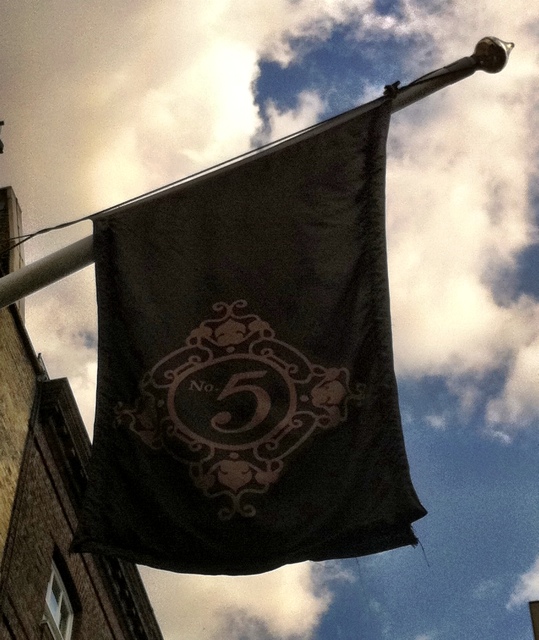 As seen over Number 5 Cavendish Square, in London’s fashionable Mayfair.

I’m taking bets on whether the designer on the flag was educated at Oxford, or just saw the pic in a book somewhere…

A couple of photosets of yesterdays’ wanderings. Mine, all taken with Hipstamatic on the iPhone, are mostly documents of the colleges that open their doors to the public.

Meanwhile, the last four pics in TLC’s ongoing Oxford set show some of the folk dancing that you always see in town on May Day.

And for completeness, a little video of the two styles in evidence that we came across.

Yesterday, we cycled down bridle paths, skirting jewel green fields and dozing livestock, to Mapledurham House in the heart of West Berkshire. It’s the home of the oldest working watermill in the country, and you can buy flour ground on the premises. It makes excellent loaves, and they will also sell you miller’s bran which adds a beautifully nutty crunch to your morning cereal. We bought herbs and ate good pork sausages and venison for lunch, washed down with a pint of Hoppit from the Loddon brewery, about ten miles away. Then we sat and ate ice cream, sitting amongst daisies by the side of the mill pond in the sunshine.

Today, we took the train to Oxford. It’s May Day, and traditionally the students are up all night carousing before gathering on Magdalen Bridge to hear the college choir sing at sunrise. There are morris dancers, and an air of springtime festivity spices the air. We had a pint of Lunchtime Bitter from the West Berkshire Brewery at the Turf Tavern, a well-kept secret tucked in a maze of alleyways. Deer cantered in the grounds of Magdalen, and the freshly refurbished quad at New College sparkled in the clean air.

I have never felt so proud and happy to be English this weekend, and it had nothing to do with the dog-and-pony show laid on for the tourists over That London way. This country is filled with delights that everyone can enjoy, regardless of your family connections or who you get to marry. My England is a long way from airless pomp and pageantry. In the fields of Mapledurham, on the bridges of Oxford, my England blooms.

TLC gives us two visions of The Greenman on her blog, which just keeps getting better. And an excellent choice of soundtrack, too!