INPUT ERROR: Scanning of additional data banks indicates that crew members Rob and Clive failed to mention RONALD SHUSETT as one of the credited writers on ALIEN. A key collaborator with Dan O’Bannon, the pair would go on to adapt the Philip K Dick short story ‘We Can Remember It For You Wholesale’ into another landmark Sci-Fi movie: Total Recall (also credited on that movie as writers: Jon Povill; Gary Goldman).

So, it turns out we missed out on a vital piece of data when talking about Alien. Consequence: three weeks in the space doldrums on a diet of sprout protein and beans.
The atmospheric controls have been taking a hammering, I can tell you.
CycloMedia has started talking to us again, and has challenged us to improve his knowledge of Automan.
Because if there’s one thing we hate talking about, it’s obscure 80s SFTV from the master, Glen A. Larson.

Cursor, draw me the Autocar…

and while we’re at it, let’s check out some Automan action! 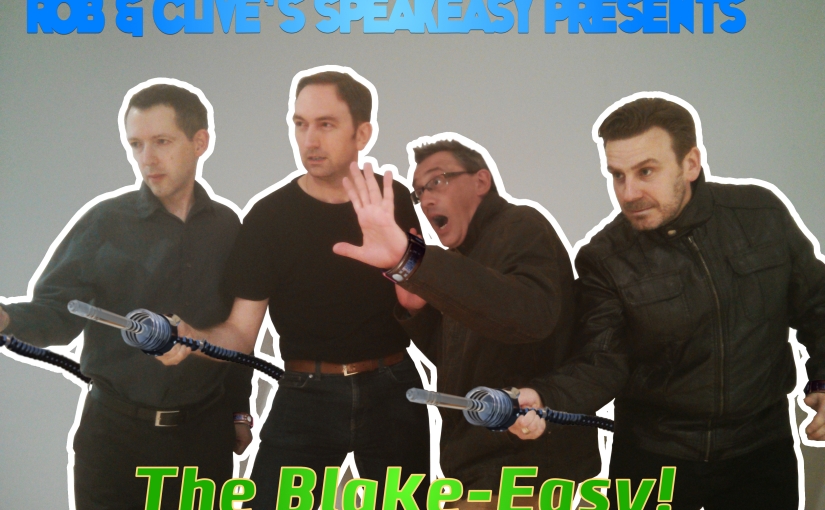 The climax of Blake’s 7 Month on Excuses And Half Truths: our gigantic (no kidding, I’ve had to split it in half) retrospect-o-view of the classic British SF show. Join Clive and I, along with Speakeasy regular Keith Eyles and friend of the blog Chris Rogers as we look at the characters, costumes, production values, themes and soooo much more. Settle in, Listenership. We’re heading for Galactic Edge with this one…

I wanted to push a site that I’ve been a fan of for a while. If you like cult movies and TV, you’ll dig this too. 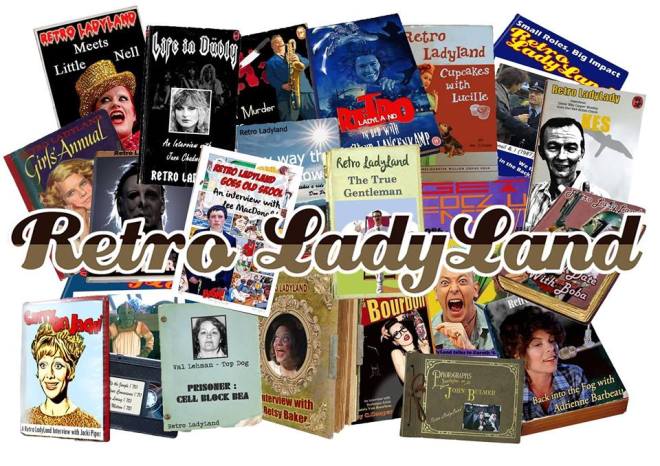 Retro Ladyland is the brainchild of Charlotte Cooper, an old friend of mine. She runs a vintage shop, Missy Lil’s, and writes for vintage fashion magazines. But she’s a big movie buff, and has poured her passions into Retro LadyLand. She’s managed to snag exclusive and slightly twisted interviews with all sorts of interesting figures from the world of cult and trash film and TV, making the site a bit of a must-read if the notion of reading exclusive interviews with Heather Langenkamp or Betsy Baker floats your boat.

I caught up with Charlotte recently and asked her to explain herself.

How did you come up with the notion for Retro LadyLand?

I was and still do write for a vintage fashion magazine and love it, but sometimes talking endlessly about floral designs and skirt lengths can be a bit… I hate to say it, but a bit dull…

I have always been a celebrifile (I have just invented that word) and thought, lets try and contact someone and interview them and to my amazement the first person I asked said yes! Then I thought about the format, something that would make my interviews ‘stand out’. I had never written fan fiction before, but knew the market was vast, so I thought, why not incorporate both? An interview with a back story and viola, Retro LadyLand (Two capital L’s) was born.

What’s the philosophy behind the site. Or rather, to put it in a slightly less wanky way, what is Retro LadyLand designed to do?

I see it like your favourite band singing all your favourite hits at a concert, instead of going to see a band and them playing their new album, which you don’t know and frankly aren’t there for (I think we can all relate to that). In the majority of my interviews, although I do skim over the more up to date aspects of their career (as in Adrienne Barbeau talking about her time in Argo), I like to concentrate on why we love them, their heyday… How we remember them. But most importantly, Retro LadyLand is designed to entertain.

You’ve snagged some great interviews with some amazing figures. How on earth did you get hold of them?

I just e-mail them, politely and sincerely and once I got one ‘biggy’, they all started to say yes… Although the Krankies asked for money!!!

My favourite is hard, as they are all such lovely people. Listening to Shani Wallis talk about Sinatra, Liberace and Garland was a rush and Heather Langenkamp was a teenage hero of mine. But I think it has to be David Bradley (Kes). He was so lovely and sincere and was so young when he played Billy, but still loves to talk about his time filming with Ken Loach, plus it is also one of my all time favourite films.

We love spoilers here at Excuses And Half Truths. So, are there any upcoming treats you can let us know about?

I have a festive treat for our Christmas special: an interview with Eileen Dietz. Now horror fans will know that name straight away, but if not, she was the Pazuzu, the devil in The Exorcist. The face that gives you nightmares! Also coming up we have Dana Barron, who was the first Audrey in the Vacation movies and I’m very excited about Nancy ‘Robocop’ Allen, coming soon too! Happy reading!

Well, that’s a sack full of goodies. Retro LadyLand is a solid read, and full of interesting material for those of us that love a bit of cult. Thanks to Charlotte for chatting to us. Check out the site, and say hi. Tell ’em I sent ya.

RETRO LADYLAND THIS WAY>>> CLICK on MICHAEL MYERS FOR ALL THE GOODIES!

That would be Doctor Who, which always stuck out of the Saturday night schedules like a Sontaran at the dinner table. Gleefully absurd, cheap and cheerful, dark at heart yet always somehow comforting. Effects straight out of the Blue Peter school of sticky-back plastic. Acting straight out of regional theatre.

Yeah. Not any more. Not for a long time. Under Russell T. Davis and more recently Stephen Moffat, Doctor Who is now the best-looking, best acted show on the box, and one of the most contradictory. Ostensibly still a kid’s programme, at least when you look at the extensive BBC website and all the associated mercy, Doctor Who is at the same time deeply complex and terrifyingly adult. It not only refuses to talk down to it’s audience, but launches off in all directions at once and dares the viewer to keep up.

This season, Moffat’s second as show-runner, has been made with money from BBC America, and was supposed to be the moment when the show would break in the States. You would expect, then, a couple of episodes in which a new audience could be eased gently into the story. Something entry-level, with a decent dose of explanation about who the guy in the blue box that’s bigger on the outside than the inside is.

Nope. Sorry. Within ten minutes of the opening titles, the Doctor had been killed, and then reappeared as a version from an earlier timeline. There was something about Scream-faced monsters that you forgot about as soon as you looked away from them. And where the hell did the red-headed broad from E.R. come from? Also, when the heck did the show with the monsters made out of bubble wrap get so goddamn scary?

Since the reboot, Doctor Who has been in the hands of writers who not only get the Doctor and all his dichotomies, but were responsible for keeping the flame lit during the wilderness years. The Paul McGann TV movie aside, the period between the end of Sylvester McCoy’s time in the Tardis and Christopher Eccleston shrugging on the leather jacket was one of furious invention and true high concept adventure. In books, audio and comics, writers like Davis, Moffat and Paul Cornell could carve out stories that didn’t have to be concerned with budget or kid-friendly attitude. They could bring a Doctor to life that had rarely been seen in the shows, a Doctor filled with moral ambiguity, a Machiavellian manipulator. More importantly, a Doctor that instils fear. The Doctor that can turn armies around at the very mention of his name came out of this free and fertile period.

Today’s Doctor Who is a very different programme to the one I grew up with, the one that scared me behind the sofa for two seasons running. The pace, of course, has sharpened, as stories are fitted into forty-five minute slots instead of the two-hour four parter format. Although it’s good to see more two-part cliffhangers, giving the characters a little more room to breathe. It’s also more overtly scary, as Moffat creates adversaries designed to exploit our all too human weaknesses, the flaws in our perception of the world. Creatures that attack in a blink, or hide in the shadows.

And all of a sudden, more adult fears are also being exploited. Constant, unexplained surveillance. The doppelganger, the enemy with your face. Or the terror of a mother losing her child. All tied into a narrative that has no problems with skipping hundreds of years and light years in a single jump cut. It’s epic, demanding and yes, exhausting work. To be honest, I tend to watch the show on catchup, when I feel ready for it. That also gives me the rewind option for those reel “huh?” moments.

But Moffat’s refusal to compromise hasn’t lost him viewers. Considering what else is on around the same time, it’s not a surprise that anyone with the taste for big, brash but thoughtful action would be all over this show. I have niggles with the way the show has so tightly interwoven with it’s backstory, but these are only niggles. Doctor Who is far and away the best thing on British telly at the moment. It’s fearless, tough and when it hits the big notes, a sheer and utter joy. It lures high end names and the best writers in the business. When I realised it was going on break until the autumn, I yelled in disbelief. Although the big reveal wasn’t that huge a surprise, it’s wonderful to finally have River Song’s place set in stone. And with these six episodes, the set up for something extraordinary to come rolling out of the gates in September is well and truly in place.

Now all I need is one of those damned time machines so I can see those episodes now!